Today I was in the line for the subway, and I heard the two old ladies standing behind me in line discussing me. One commented that she liked my hair; her friend agreed, but then added that my ass was big.
Understanding. Understanding anything, the smallest, most obvious words, is perilous. Being aware in a country that thinks you deaf, dumb and blind is hard. These moments are among the only when I might stand behind the banner of ignorant bliss.
Of course, one minute later I was sat across a pair of women talking to a small dog in baby carriage, so who are they to judge? 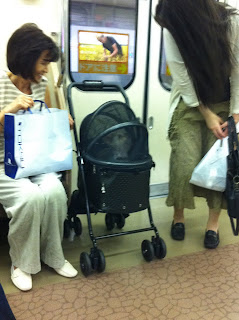 Posted by Scarlett at 4:38 AM No comments:

Ok, so I've been lazy. People take blolidays. They're allowed. It's a real thing.
Lucky for y'all, my hiatus means that you don't get a blog on people knocking over bikes or dropping yellow trash bags, you get to experience a real, live, unique Japanese event with me: the High School Festival.
Do you remember your high school days? I do. I remember class. I particularly remember science class. I remember lunch time. I remember the uniform and the commute and the gum stuck to the bottom of the desks. But what I don't remember ever having was a week of pure, unadulterated, blissful celebration of the fact that you're in high school (FUCKYEAH), you're smart (SUCKIT) and you're surrounded every single day by the people you like best (ANDALSOPEOPLEYOUHATEBUTTHAT'SNOTACAUSEFORCELEBRATION).
I am in the midst of school festival week at my high school, and every single day it's like a cute bomb exploded in my face, and the debris is puppy dogs and nicknames and high fives. The week started on Monday (they often do) with three days of sports. We've covered the fact that I'm no sportswoman, but these kids are. They all are. And they're competitive, and cool, but they're also still just so damn Japanese. In volleyball, if a kid misses a shot, he will drop to his knees, puts his palms together, and bow his head to his team mates to ask their apologies. Which they will always give.
They compete as class groups and, inevitably, the entire class will show up to support the players, whether they're good or bad, girls or boys.
Take this boy for example: 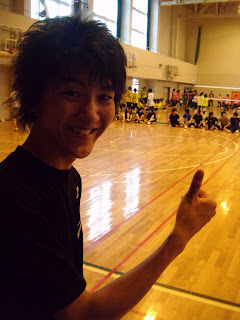 He is a volley ball STAR. The whole rest of the team just existed as a backdrop to his AWESOME. And every time he took a shot, all of his classmates yelled a chant composed in his honour, in unison. It warmed my heart. They won, of course.
In conjunction with their attitude is their GARB. Each class designs a t-shirt in the colour and print of their choice, and has a nickname put on the back. It makes for some interesting insights into their characters: 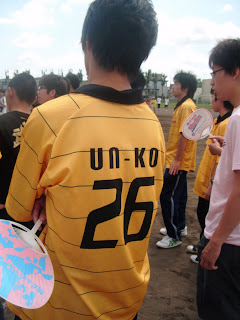 Just seems like an unusual choice for sports day? 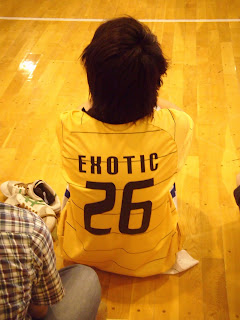 I'm going to borrow this one when he's done with it. 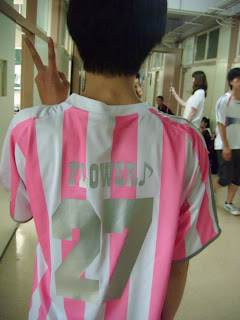 Japanese men are unafraid to embrace their feminine side. 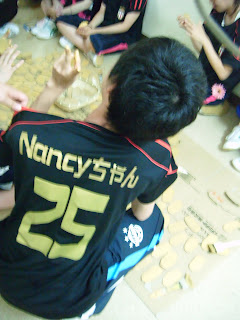 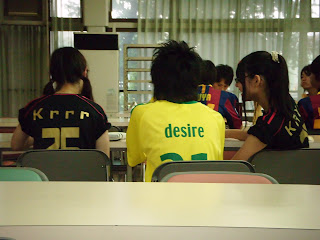 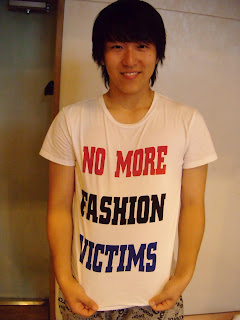 Sing it, brother! (who am I?)
After three days of sports, the real festivities start to kick in. I publish this on a Friday, and the official festival day is not until tomorrow (this is when the school is open to the public, and the kids all decorate their classrooms and encourage visitors), but there were plenty of activities for excitable teenagers to fill their time with. For one thing, dancing: 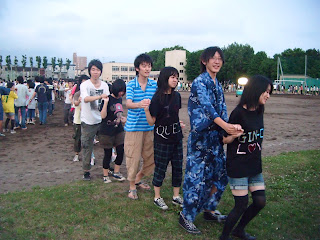 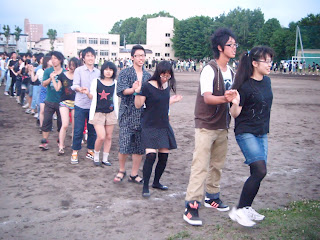 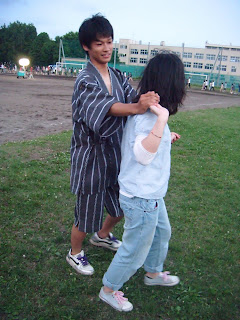 Dancing, to Japanese folk music, in a big giant circle. Cutting loose! Cutting some shapes! Being endlessly cute in Japanese traditional clothes (jinbei? something else altogether?) that look like pajamas to the point that my arteries clog up with choke and I choke on cute and and I die and am buried in cute (the soil is glitter and tiny plastic cherry blossoms and Hello Kitty beads) and go to cute heaven.
My favourite part might be the sections of the circle where the fact that boys outnumber girls at Kaisei becomes evident: 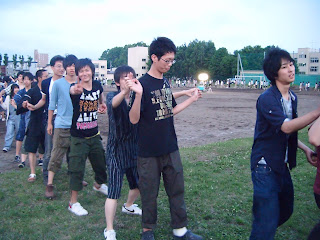 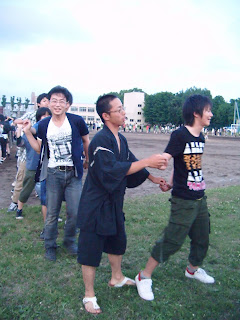 MAN LOVE. Japan as a society might not endorse it, but I sure do.
After the dancing, the sun went down and it was time for FIREWORKS. The Japanese love fireworks. They're sparkly. Colourful. Festive. They're also romantic, apparently - it's the time of year during which young couples profess their undying love for each other, as they stare at the visions of gold and red and green in the sky, and see their future together. Sigh.
It's also the time of year when teachers are given the unfortunate duty of paroling nearby parks and karaoke booths to check that the aforementioned young couples aren't... sealing the deal.
My favourite part of the last few days? When a second year student from one of my English classes approached me on the field. "I don't have... girlfriend" he said. "Can we watch fireworks... together?" How could I say no? So we held hands and watched the fireworks, and every now and again he would say "They are so beautiful... but not as beautiful as you". 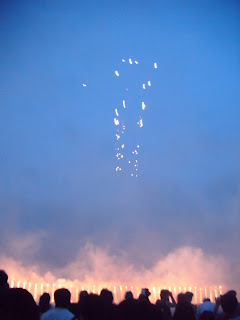 Posted by Scarlett at 1:07 AM No comments: